After 40 years in the Desert back to colder climate?

Back in Stockholm again, and this time it’s 40 years ago since I was in Sweden during the Christmas holidays. It’s both strange and nice to see glittering decorations inside people’s windows and all over town. Festivity in the air yet everyone is rushing in and out of stores trying to remember to whom else to buy a present. I am also reminded, that there is a ‘dark blanket’ that falls down from the sky already at 3 pm. We are sitting in offices talking to workers as its pitch dark outside… Yes, its all coming back to me.

Christmas Eve, is my Name Day – Eva. Of course every year its on the same day as Christmas -Jul- but I keep forgetting about it. But when now back in Stockholm during the holidays I remember. Its been too many years since I was here during X-mas… So I wish you all Happy Holidays & “God Jul till alla mina svenska vanner”!

After 40 years in the Desert, literally living in warmer climates, such as California and Israel, being back to colder climate can be jarring except the fact that this December is the warmest since 1977 ….yes almost 40 years ago as well. When I stayed in Sweden last summer there were colder days then now, our weather patterns are really changing, So what has happened over these last 40 years?

As you some already know, I was born in Stockholm, to a Swedish Father & Musician and a Polish Mother & Physician/Scientist/Poetess. Already then, in my Mothers womb, two different yet creative worlds molded me into whom I am today. In life, this sort of Jewish Viking mixture, has both given me advantages and strength, yet with maybe a bit too many challenges? Few things would unfortunately happen to me. Firstly, while I was still a teenager, a tragedy happened that would forever change and impact my life, my beloved sister Miriam,  was taken away from us, with a new destination, the ‘Olam Haba‘ – the world to come.  May her memory always be blessed and remembered! 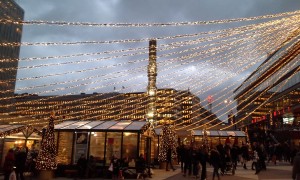 Being 15 years old, loosing a sister, is something indescribable. Hard to formulate in words, the sadness and emptiness it left inside me …  by now embedded in my soul, having known a wonderful sister who’s holy being wanted to help and heal our world. Since that year, I have not seen or experienced Christmas at all. With that bitter-sweet parting, I left my birth country, to build a new life in Israel. So in these days,  I am catapulted back into Sweden during the times of Christmas 2015, invited to my Swedish friends for a traditional  pre Christmas dinner. The only thing that was missing was the Tree. 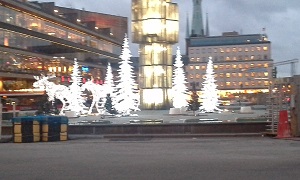 The passing of my sister was something that really shattered my internal fragile world… yet it fueled me to paint and draw thousands of pieces of art, during the grieving period in my teenage years. It was one of the best therapeutic tools to process such a big and significant loss. After we moved in January 1976 and made ‘aliyah‘ to Israel, I entered a special high school for Art & Sculpture, Telma Yalin in Tel Aviv;  that was a salvation. Also being in the Holy land with my Mother’s family was healing; slowly coming back to happiness and internal comfort. I joined the IDF, the Israeli army, as I felt it was important to help defend the country’s right to exist in its original biblical land. Later on, I attended Architecture School in the Bezalel Academy, Jerusalem, which became the foundation for my drawing and sketching skills, as well as the love of decorating spaces. The passion for painting with oil, came when I discovered my own style, The 5th dimensional art..

Still my love for Tulips was already established, without my knowing, as a child in my grandmother’s garden in Dalarna. There names was Kaj & Kajsa, a very sweet couple that became a steady point as we grew up. After finishing my army service and attending architecture school, I met, what seemed to be my soul mate forever. We got married, and for some years lived in his home country; in California. In the 90 ties, we decided to divorce as our life’s paths started to part. My curiosity for the unknown and spirituality led me to a new direction; depth for the Arts, love for Kabbalah, Tulips and Humanity.  The 5th Dimensional landscape in California became an integral part of my expression. As I began to live in Jerusalem, I matured into being more my true self, a passionate artist whom also likes to celebrate Shabbat and the Jewish Holidays,  manifesting the one I am… Eva Ariela.

So the loss of my sister and divorcing my ex/husband, and later the loss of my parents, has forced me to deal with separation from dear loved ones, yet knowing their souls still exists on another plane. One way to coop with all the loss & pain, was to see newness in all my relations by creating new sister-hoods and brother-hoods.

To Live our lives, enjoy our lives, is not always that easy, especially if one comes from cultures who are steeped in dark past history – but there’s almost always a reason for everything. So the basic goal is to love life, and a become a promoter for living to the fullest… in the best possible way.

Enjoy the last week of this year, Christmas and New Year’s Eve… Wishing that the next year will indeed be an abundant one, full of love, happiness and optimism, for all us earthlings.