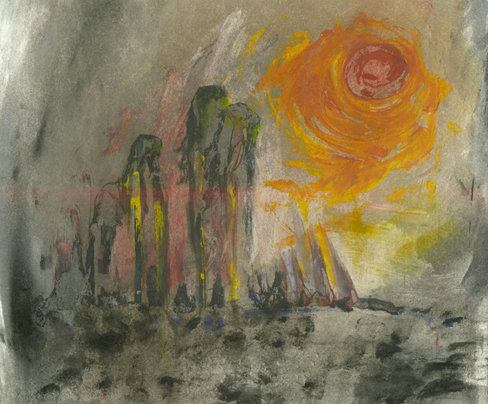 I was 18 years old when I drew the watercolor piece “Witnessing”, which feels both like a theme from the past and future at the same time. It can be seen as a scene from the Holocaust, as that is something that was shared in my home at young age, being a 2nd generation of a Holocaust survivor, and it can also be seen as a future vision of recreation. Out of the ashes we can be reborn.

and shared about her experiences during the WWII, it became a place of permission to deal with such a hard past, and move it into more creative modes of healing. I am thankful for my Mother’s resilience and how she was able to move forward and see the positive despite her past. See attached red cover book “History through my Eyes” with the same image of my drawing “Witnessing”.

This art piece was featured in Who is Who in the Art world and was published in one of their additions, when I had an art show in Paris. It was evaluated for a high price, maybe they felt it had a message. Sometimes an image can give and impressions and at times it can tell a story.

I hardly draw or paint dark pieces, so I guess this featured image is one of few such melancholic pieces. It was probably transported to me from within ~ a deeper consciousness funneled out later in age. Most of my color palette is of bright oranges, and hues, yellow and turquoise. Still, it’s always good and therapeutic to express ones ‘darker sides’, even though out through my life I never had a strong need to purge or paint difficult scenes or emotions.

So for the upcoming Yom HaShoa – Holocaust Memorial Day coming up in Israel, I like to share this visual vision. On one hand it shows 2 young girls looking at the smoke of the past, the burnt ashes, the chilling down coals of a hellish existence that invaded every pore of Europe 77 years ago. On the other hand it shows a glimpse of future hope, as the young future generation continued to grow, as a proof that those six years of hell would not kill the soul of our human spirit.

After years of hearing about it on a personal note and educationally, the Holocaust is still hard to phantom. I can’t imagine the horrible feeling so many had in 1939, when they knew they will not be able to escape the continent; their souls becoming devastated day by day, with the premonition of coming times. Not to mention the grueling endurance, for those who survived so many unimaginable situations at camps, train rides, executions, marches, in hiding and many more horrible conditions.

I am also very thankf 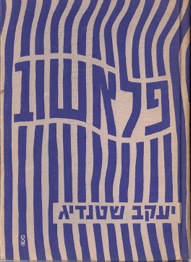 ul for my grand father Jakob Stendig who wrote the book Plaszow, in where he describes the Plaszow concentration camp, as an architect. He did not only document the entire layout of that horrid camp in Krakow, with detailed descriptions of day to day activities, but also made important notes and documentation of all the ss men, one of them being amon goeth. The book has also architectural drawings, and it was used as a main source for the movie, Shindler’s List and is used today as educational material for Yad Vashem’s students.

I was born from my Mother, whom as a teenager witnessed the cruelty of man, during her time in the ghetto, labor camps and concentration camps. Yet, me and my sister were her answer that she was still alive and wanted to bring care and kindness to our harsh world. Most of her life she spent working hard to help our world, as a scientist, psychiatrist and physician.

What I took from my Mother’s past, is the need to repair and aid our world, for good and for bad, as at times it’s kind of nice to not to have to think of any world problems and only focus on one’s own life. Still, with such background I think Art and Healing has been my way to heal and deal with life’s challenges, just like my Mother took upon her working in the field of medicine to help others live and survive.

I remember, she told me one of the main reason she studied medicine was to understand how come such a dictator came to power in Europe and how so many followed him in a blind trance of mass murder and human industry of killing? She later specialized in psychiatry, to learn the mind of human beings. Unfortunately, I forgot to ask her before she died, if she had found the answer, how this cataclysmic phenomena could have happened? In hope she had found the answer, and is now trying to do something about this phenomena high up in heaven, with other holy souls, so we will never see that happen ever again.