On my way to the Big Island in Hawaii, I saw from the airplane the ultimate beaches of paradise and green lush tropical forests. So inviting to swim in and take a dip, to purify ones soul and being, body, mind and emotional self. Wonderful to be back!

Amazing to be in paradise again within its magical nature. In my mind, I am reconstructing my 5th Dimensional artwork into a new revised version of this art style… as if a tropical nature dived into the 5th Dimensional galactic presence. Here these two seemingly opposite existences merge into one canvas… showing a united world, from above so below.

When I painted my oil painting Adam & Eve in the Garden of Eden, I invited the biblical figures Adam & Eve into the 5th Dimension Landscape. Its only today, that I realize it was the tropical aspect of the 5th Dimension. I had to revisit these beautiful islands, to recall this part of G’d’s holy creation.

The Hawaii islands are so magical and bountiful; most people you encounter are calm and content. The sacred land permeates harmony to all and embraces a reality of well being, it can be felt immediately. People are relaxed and don’t seam to get upset about anything….

So in this blog its a perfect time to display my Adam & Eve. They are two fairly large art works of a dyad – from my oil on canvas series. My next step is to paint a third ONE, in where Eve & Adam become UNITED inside one oil painting re-existing inside the SAME GARDEN (the piece will be the same size and become then part of triptych series.) In the featured image you can see the a detail of middle part of the oil paintings, Adam and Eve yearning to be reunited. In this dyadic art piece they are longing back to the beauty of the beloveds in paradise, yearning back to the divine existence they lived in, before they ate from the apple.

Eve in the Garden ~ waiting for Adam

Eve in the Garden of Eden, is looking to reunite with Adam, after she ate the apple, the ‘sin’ created a rift between her and Adam, as well as a shift in our consciousness and the world to come. She is still pregnant from before eating the apple, so in her belly resides endless potential and birth.

Their future re-uniting on a deeper level of union, will bring forth a powerful relationship, as well as redeemed world. 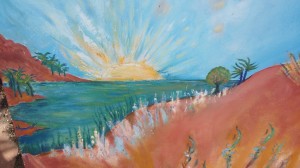 Adam in the Garden ~ waiting for Eve 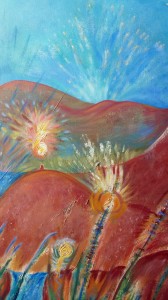 Adam in the Garden of Eden, is looking to reunite with Eve, after she ate the apple, the ‘sin’ created a rift between him and Eve, as well as a shift in our consciousness and the world to come. Adam’s beloved is still pregnant from before eating the apple, and in her belly resides endless potential. Adam is eagerly wanting to re-connect with Eve, as he loves her deeply, and also feels guilty he did not stand up for her after the ’sin’.

To view other of my oil paintings, please visit my gallery.

Parallels between the Holy Land & Hawaii

If you take an imaginary long line from the Holy Land through the globe, Mother Earth and envisioning it coming out on the other side of our planet, you would end up close to these islands. Its almost like the energy from the Foundation Rock in the Holy of Holiest placement inside the Temple mount in the old city of Jerusalem is projecting its radiance to this side of Mother Earth, and spilling out in the Pacific Ocean and over 7 Hawaiian islands. Maybe like the 7 sacred cities of the Holy Land (Safed, Tiberias, Jerusalem, Hebron etc.), projected out words in a large circle.

A whole ocean exists to contain its energetic radius coming out from within Mother Earth and flowing over and out around the islands. Especially, around the Big Island – also called Hawaii by the Hawaiian people. It’s interesting to note that there is a steady flow of lava spilling into the ocean, started in 1983 and has not stopped till today (this is the longest lava flow ever recorded in human history). Here the fire is meeting the water element. The island is still forming and may be connected to the Holy Land, bringing more of its sacred hidden powers out from the other side of Mother Earth. May the land of Hawaii also bring calm and peace to the Holy Land to help balance peace in the Middle East.

To me the sacred space of the land, the nature and the Big Island’s Pele Energy (Pele in Hebrew means Miracle), very likely correlates to the Holy Land and the Holy City. Both are G’d given earth bound yet spiritual places in our world. The word Hawaii is equivalent to YHWH (four letters of HaShem/G’d ), Kahuna (The Hawaiian Priest) derives from Cohen, and Aloha derives from Elokim (Elohim). Interesting to note that some of the Hawaiian people use Hebrew names, like Israel and David.

May we all meet in paradise and enjoy the bounty of G’ds Creation.