A close encounter between History and Art 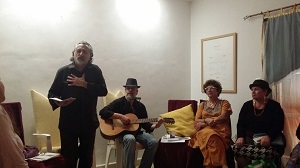 First of all I’d like to thank everyone who attended last weeks event, in remembrance of my beloved sister’s 40th memorial. The Poetry for Peace event was really an uplifting experience, especially since there are so many terror attacks and stabbings in Jerusalem lately, to our dismay. Many assumed we were going to cancel the event, as this was the case for other venues. Yet we said, ‘that it’s now that we need to gather and speak words for Peace’. Words create Worlds… So if we do not utter words of truth and peace, we neglect making a difference.

My projected 5th Dimensional Artwork was also a wonderful and playful addition to these intense times of uncertainty. Musicians who shared instrumental pieces in between the poetry readings made it feel like a saloon, the way Artists, Musicians and Writers used to gather in the beginning of the 1900’s. That was the era of the Impressionist and new thinking, and I hope we in our modern times are also weaving a new era, despite so much havoc, there is a renaissance of new ideas and art forms. So in hope that my art will also be a new fresh expression for others to enjoy. The Flamenco Dancer, Micaela Harrari, also brought her own touch of movement within the 5th dimensional landscape. Beautiful, and very much appreciated.

The shabbat after the Poetry for Peace event, we had a ‘Kiddush” at Beit Ha Rav Kuk, for my sister MiriamFelicia’s Hebrew 40th memorial date, which falls exactly on the Torah Portion of ‘Parashat Noah’. The great Noah who built the ark on G’d’s commandment, in order to create a new and healthy society, and therefore saved our world. It’s interesting to note that my sister Miriam Felicia’s passing away 40 years ago, could correlate to the story of Noah, in where they were waiting for the flood to cease inside the Arc for 40 days. In hope that a new period will come upon humanity, with less wars and suffering.My sister was a Poetess, an artist as well, and an avid Peace worker for her young age, 18 years old. May she help us from high above to achieve Peace in our fragile world ~ speedily and in our days. Amen.

Talking about Noah, in the weekly portion of the Torah, I am pondering what he must have experienced when G-d told him to enter the arc, together with two of every living animal. I can intuitively feel a bit of a connection to Noah in different ways: the unknown, what will happen. The excitement of the process, while the ark was rising from the ground, the miracles to come.  And last but not the least,  the end of a harsh world and the beauty of the beginning of a new kinder reality – the final result of starting a new LIFE upon EARTH again, as well as the auspicious rainbow.

Imagine when G’d/HaShem told Noah what’s going to happen – the feeling that he must have felt – probably a deep trust to have gone through the hardships of steering humanity into new directions, in hope for a better world to come. During Noah’s time on board the arc, he wasn’t too sure what would come next. Yet he knew the purpose of leaving the old behind him and with his own eyes seeing the water rising and the flood covering the earth, probably feeling a deep calm & faith. Even if probably occupied with thoughts of when would it end, and what would the end look like? Noah knew that G’d is the greatest harbinger.

In a way, I can see myself in this story a bit as well. When I start a new canvas, I go into a place of unknown, yet know the outcome will be partly guided from above. All I need to do is allow my imagination and my hands do the work, while telling my ego to go for a vacation for awhile. I know myself and my abilities when it comes to painting and other kinds of work with people – still, sometimes along the way, I don’t know what to expect when we eventually reach the end. The ‘seas can be turbulent like with the arc’ at the end of a long term project, during events or workshops or in the creating of an oil painting – where the last piece of the puzzle is still unknown? Will the work benefit people or not? Will the end project be pleasing to the eye of the beholder? Thanks to the divine, most of the times the outcome is magical, as I trust the process…maybe a bit like Noah in the flood. 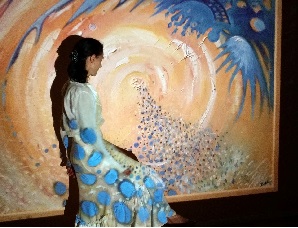 As I mentioned in the beginning , during the hard times many of us are experiencing here right now in terms of security and violence, I hope we all can focus on positive outcomes and love. Instead of freezing in fear, let’s try to enjoy the beauty of our lives and all that G’d/HaShem is giving us. Let’s think of all miracles G’d has given us throughout history, and among many others: Noah and the arc, that saved us all from drowning – saved the Jewish people & ALL people and animals in the world were saved from a dark society. May we be able to hold the space of uncertainty in our lives,  instead of feeling insecure. And mostly, stay TRUSTING and in DEEP FAITH, that we will be able to recreate a better society without the dark and evil forces wanting to control the LIGHT and move into a more loving & gently humanity.

One day, hopefully very soon, will we, in similarity to Noah, see the rainbow that “told” him: “You’re safe”. In more than one of my imaginary paintings, my dreams, I envision artwork containing the redemption and entering  higher Divine realms, in where the Holy Temple shows the cherubim facing one another and not standing back to back to one another. In hope I will find more time to create these paintings soon. May we soon see goodness and love all over the world, speedily and in our days. Amen.